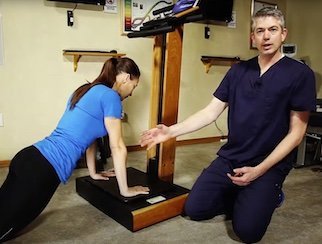 Whole body vibration machines stimulate movement throughout the body by allowing the muscles and joints to respond naturally to the vibrating plate’s movement. The vibration plate essentially mimics the body’s response to walking, running, or jumping, but at a much faster pace and lower intensity. That allows much more exercise and movement to be accomplished in a short amount of time. The vibration machine also moves 95% of the body’s muscles at once, so underused muscles are strengthened.

These machines were first developed to help astronauts and cosmonauts use the body’s own mass to maintain muscle and joint strength while in space for months at a time. The same principles work for people on earth.

A wide variety of machines use different types of vibration to achieve that movement goal. Powerplate, for example, moves vertically, like jumping, with extremely fast, minimal height changes. This direct vertical movement pushes the spine and neck straight up and down, carrying the vibrations into the skull.

Others, like Lifetimevibe, Hypervibe, and Zaaz, move more like a see-saw, in an oscillating movement. These machines move more like walking or jogging: when the left side goes up, the right side goes down. They also have a more natural, higher up and down motion that is not as extremely fast. Because of this more natural movement, the spine and neck does is not jarring straight up and down. Instead, as the left hip goes up, the right hip goes down, causing the spine to move naturally, rather than vertically. Users report much less head vibration because the head is not jarring vertically.

All of this movement causes the muscles to contract and respond, requiring increased oxygen, which increases blood circulation. As joints open with the movement, the oxygen also travels into joints, which gives cells the fuel they need to heal.

Oxygen’s healing effect is so well known and important that sometimes oxygen is injected straight into the joints with a needle. Whole body vibration enables this oxygen to travel into the joints due to the body’s natural circulation, without needles.

Also, because the muscles are firing rapidly and responding to the natural movements, the central nervous system is activated. The brain increases its’ response rate, as nerves rapidly send signals back and forth. Nerves detect changes in balance and send signals to the brain, which responds quickly with direction to fire the muscles needed to maintain balance. All of this central nervous system activity strengthens nerves and brain connections.

Finally, unlike specific targeted vibration, full body vibration movement benefits the lymphatic system. This system heals white blood cells, which attack and eliminate toxins, bacteria, and viruses. The lymph circulates only with muscle movement. As the muscles throughout the body move, blood and lymphatic fluid circulates. This accelerates the elimination of harmful materials from the body.

All of this exercise has been found to provide a wide variety of health benefits. You can read more in our summary of extensive research on health improvement from vibration exercise.